The eLTER IC is the decisive body to discuss and approve strategic issues of the emerging eLTER Research Infrastructure (RI) planning and implementation such as legal, governance, financial and operational matters. Therefore, an pro-active IC with delegations from as many countries as possible marks a major milestone in the eLTER Preparatory Phase Project (PPP) and in the entire eLTER ESFRI process. The meeting was prepared in numerous steps since February 2020 with the National Coordinators in 27 countries, the coordinating team and the German ministry in charge for the host country (BMBF).

Many of the IC delegates explicitly  appreciated the sciencе case, and the “first successes” of the eLTER project. The high scientific quality of eLTER will continue to be the core value and guide the work in establishing the RI.

“We are looking for a fruitful and effective collaboration with the IC”, said Michael Mirtl, the coordinator of the eLTER Preparatory Phase Project, and interim chair for the IC until the next meeting .

The founding IC meeting was held virtually as a full day event without any technical problems - thanks to the routine and tools the eLTER coordinating team had developed since the pandemic emerged.

The mere numbers of participation in the IC were beyond expectations, specifically when considering the performance criteria the eLTER PPP set in mid-2020 to calibrate expectations in pandemic times. Concerning the IC, 11-13 countries (out of 19 that supported eLTER politically at that time) were estimated to participate in the first eLTER IC as target (and success). To a positive surprise, Czech Republic sent the ministry level Expression of Support to the eLTER ESFRI process in December 2020 helping to pass the magic threshold of 20 formally supporting countries.

The current IC member countries (having signed the Expression of Support and nominated the delegates) are:

Despite the hectic times before the holiday season and many busy ministerial representatives, the meeting spirit was relaxed, constructive and very positive. All the decisions were made in consensus after discussion.

The highlight of the meeting which will have lasting and fundamental effects on the development of the eLTER was the preliminary decision to strive for a European Research Infrastructure Consortium (ERIC). Other matters decided by the IC was its own Rules of Procedure, and the Work Plan 2021/2022. The IC gave the PPP valuable feedback regarding the Strategic Plan and stakeholder engagement.

The eLTER early success stories comprised progress on choosing tools for intelligent data integration as service pilots for eLTER RI (cookie cutter) and representativity analysis of the pool of sites for eLTER RI.

The overall impression of the IC participants about the meeting are shown in this word cloud, which was a nice Christmas present for all of us: 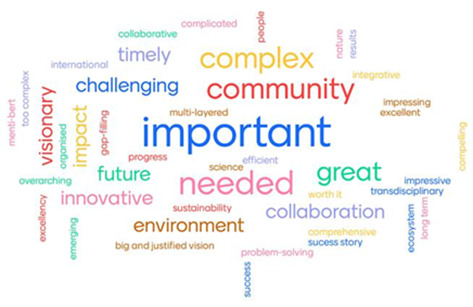 “This Interim Council meeting opens another important chapter in the establishment of the eLTER RI. Research for sustainability is among the most important goals of BMBF. There is an increasing awareness for the interconnection of biodiversity, ecosystems, social development and health. BMBF supports research regarding the conservation of biodiversity, emphasis is placed upon improving our systemic understanding of biodiversity changes, and on developing instruments for decision making in policy and industry. The support for eLTER is an important piece in this puzzle, because eLTER provides valuable contributions for national and ecological trans-national research and for the European biodiversity strategy and climate policy. With some 200 sites in 20 countries, it delivers transboundary long term observations for the evaluation of ecosystems changes and the related drivers. The increased adoption of mutual standards and technologies make this research more effective through the sharing of capacity and knowledge. Collecting and managing long term data at hundreds of sites is a daunting task, but it will be mastered through eLTER’s joint efforts.”

In its next meeting, to be held in June 2021, the IC will continue to discuss and decide about several strategic issues for eLTER development.