Dr Jan Dick is a social ecologist at the UK Centre for Ecology & Hydrology (UKCEH), a member of the LTER-UK’s Environmental Change Network (ECN) team and an active contributor to eLTER. Jan gave a talk recently, during which she described UKCEH's interest in using passive acoustic monitoring techniques. She was speaking at the UK Acoustic Network's symposium in Manchester (15-16 June 2022).

Jan presented work by eLTER that aims to define a set of standard observations and associated methods, to be applied at participating European LTER sites. Some of these standard observations will use acoustic monitoring approaches, for example, to monitor birds, bats, frogs, and certain insects, such as grasshoppers. She then presented some on-going research at the ECN’s Cairngorms site, funded by the UK-SCAPE programme, that is making use of ultrasonic microphones positioned at three carefully selected locations in a stream catchment to study the resident bat population.

Additional research by Jan and colleagues in the Cairngorms region invited people to explain their relationship to nature. The soundscape featured prominently in peoples’ responses, including the sounds of the wind, birds and the river. Her presentation highlighted the potential role of acoustic monitoring in socio-ecological studies to help better understand peoples' appreciation of landscapes.

As well as presenting her work, Dr Dick was an invited member of the symposium’s panel responding to audience questions related to soundscapes. Around 130 people from a range of sectors - including academia and environmental consultancy - attended the symposium, which included speakers from a wide range of countries. 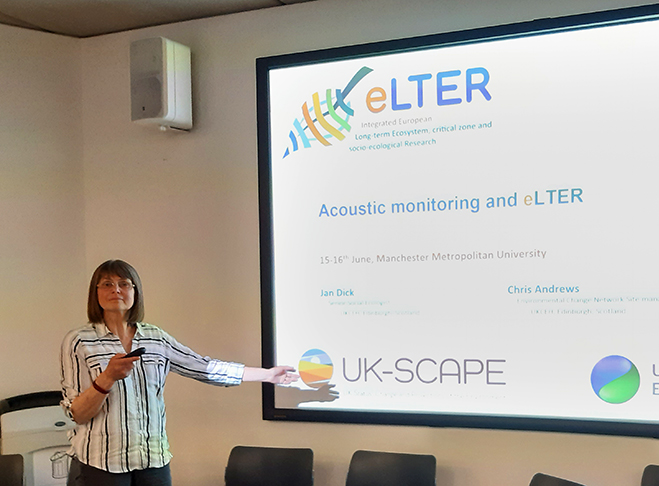